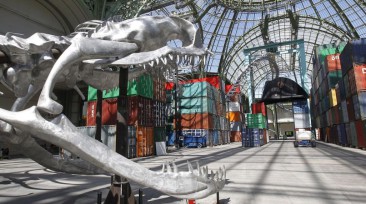 Every year, LEAP/E2020 is offering you a short overview of the up and down[1] trends of the year which is starting. In addition to the intellectual interest of this contribution of LEAP/E2020, which of course reflects many of our researchers’ analyses over the past few months, it aims at providing a better perception of priorities within the news, at the same time conveying tracks of recommendations. This list can thus help very concretely the GEAB reader to get prepared for the year to come. With an eleven-year success rate ranging from 69% to 85%, this annual anticipation is a very concrete decision-making tool for the next twelve months.

The following 35 Trends highlighted here after are related to the following ten Very Wide Trends for 2017:

. The consequences of the Very Big Western Defeat in the Middle East in 2016, which represents a gigantic “game-changer” of which we are not yet fully aware but which is already at work.

. The great change of political orientation of the United States, and in particular the policy of the “America first” which puts an end to 30 years of “America-world” and paves the way for “Europe first”, “China first”, “Russia first”, “India first”, “Africa first”, etc.; a tendency which, if not structured rapidly, implies big conflicts.

. The obvious consequence of this sudden direction shift on the instances of global governance as we knew them; with assumptions of direct derailment for some of them and necessary reforms for the others.

. For Europe particularly, the disappearance of any common project or vision, linked to the failure of the EU, mechanically bringing to the surface all the pathologies of the past (dreams of empires, ancestral hatreds, etc.).

. An identical risk for the world if a convincing and democratically legitimate global governance project does not emerge right away.

. The fluctuating lines between the multipolar world and the bipolar world in 2017, with risks of marginalisation of a Western “bloc” crossed by fracture lines, facing a “rest of the world” trying to organise on multipolar logics within the framework of the new model of governance proposed by China

. The great political chaos which Europe will present to the rest of the world with an ideological hardening, which will tarnish the brilliance of the beacon of humanist values ​​that was still diffused by Europe.

. The end of neoliberal apolitical one-track thinking and the return of the current affairs’ management by politicians at the only level where they exist: the national level.

. The risk of confinement, especially on the Europeans’ side, in a distorted representation of global reality under the blows of a technical and ideological failure of information systems.

. The directions given in the West by a totalitarian evolution nourished at the breast of the trans-humanist thought coming from Silicon Valley, which intends to cut out the human.

[1]     The Up trends are those growing, while the Down trends are the disappearing ones… because what really matters within the anticipatory work, it is the film more than the picture…