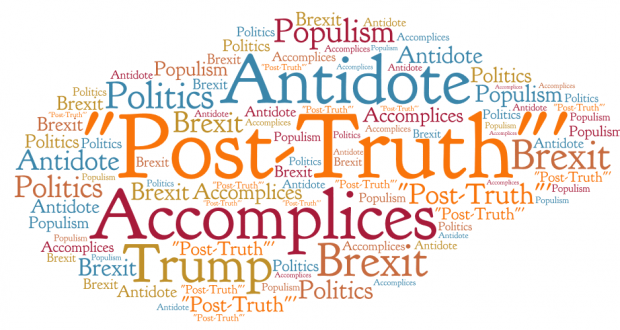 It could be said that we’re all accomplices of the so-called “post-truth”, although not to the same extent. But, what is the post-truth?

The post-truth refers to circumstances in which emotions and personal beliefs are more determining when shaping public opinion than objective facts.

The post-truth is used in the political sphere. It is incorporated by populisms and reflects a general principle well known in marketing: what matters is not reality, but perception of reality.

The mechanism is simple. Someone gathers some truths that are recognizable by all of us, but tells them in a politically incorrect way, and that’s it! Intentions don’t matter. We accept that person as the new saver.

But who are the accomplices of populisms? We, the citizens that allow ourselves to be seduced by them? The ones that just resign ourselves to them? The political leaders who manage the status quo? The invisible hand that moves everything?

Let’s take for instance our Europe. Most part of the political class is aware of the mistakes committed over the last decades. But, what are they waiting for to publically acknowledge the true causes of the current crisis?

This is an article written by José Maria Compagni Morales, member of our Franck Biancheri Network and LEAP’ General Secretary. It was written for the Friends of Franck Biancheri Association. READ THE COMPLETE ARTICLE HERE !