Home / Home / Accueil / Syria – only one possible goal: to prepare the peace in the country 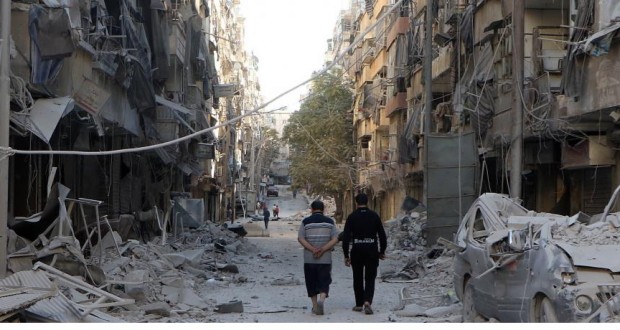 Syria – only one possible goal: to prepare the peace in the country

During the past weeks, we have seen an increase in tensions between Russia and the West. On the western side there have been some accusation attempts on Russia claiming that they have committed crimes against humanity; and on the Russian side some accusations have been made against the western alliance of supporting Daesh. The torrent of violence is at least worrying: a Syrian conflict which would become an open conflict between the US and Russia (each side bringing its allies into its wake), represents an evolution which no one desires… especially not the Europeans who are the other side of the middle-eastern coin: same diversity, same complexity, same sector… If Americans tend to wrongly imagine that a global conflict would spare them because of their geographical situation, it is definitely not the same for Europeans who don’t need to make a big effort to realise that their cities would start to look like East-Alepo.

In this extremely worrying context, our team finds it essential to highlight the dialectic of the goals gripping this conflict. We can identify three types of objectives in the drama which has been tearing Syria apart since 2011:

.Destroy Daesh and prevent the establishment of an Islamic State in the region

.Bring the peace back to Syria

The 1st objective concerns the American side (including Saudi Arabia and Israel), who transformed the Syrian demonstrations of the Arab Spring into a civil war, because of illegal arms shipments to « rebels ». The situation got worse, resulting in hundreds of thousands of deaths, without taking down Bachar el-Assad until the Russians (upon request of the Syrian government) got involved into the conflict in September 2015.

The second objective concerns the Russian side (including Syria and Iran), a goal which, further to attacks and migratory waves, have brought Europeans to support it in dribs and drabs. Russians, loyal to the spirit of their method, don’t go for subtleties and ram the enemy positions,  even if some populations have been taken hostage by enemies to prevent bombings, allowing the government forces to recover some of the lost ground faster.

These two objectives are complex and each in their own manner, questionable. Both depend on biased interests and ideological pathologies: support for a dictator on one side, support for a jihadist guerilla on the other side.

This is why we find relevant to reaffirm the only universally acceptable objective: to stop this civil war. Yet, because the Syrian civil war is the result of a Saudo-Irani scaling to a Russian-American conflict, it becomes obvious that any aggravation of the tensions between Russians and Americans will only worsen the situation in Syria… and in Yemen actually. Neutral actors must try to contribute to slow down the tensions between these two last belligerents. And because their fight relies on their bias with the two regional powers, Iran and Saudi Arabia, Neutral powers must make Russians and Americans work on this exact part of the folder.

This strategy has the merit to put each of the actors in the right place:

.the regional powers responsible for the crisis: Iran and Saudi Arabia

.the external powers: Russia, United States and Europe, whose only rightful role should be to create the conditions for a return to sustainable peace

If we take a closer look we realise that Russia in the framework of the OPEC negotiations, plays its role in the appeasement of the Iran-Saudi tensions. Obama’s United States also played a positive role on this aspect, by accepting the international community’s lifting of sanctions. But to a certain extent they are stuck midstream in which Syria is drowning.

It is important to put down in black and white another characteristic of the Syrian crisis’ status: The Syrian government and Russia are about to win! And this perspective is driving the US crazy. They were not able to intervene directly, blocked and forced to respect the UN rules, whereas Russians, invited by Bachar el-Assad to intervene, were legitimately able to be on the ground. It is the International law as enacted by the Occident which allows the victory of the dictator on the jihadists. So, of course, this raises a number of questions. But any attempt of an outcome reversal for the purpose of this terrible civil war will only end up with a perpetuation of the horror, the perspective of a victory of the other side being already very far away.

Therefore, to save face and support the end of the civil war as well as the transition towards peace, It is urgent to prepare a Peace Summit in Syria, bringing around the table all the actors of the drama and regional actors: US, Russia, Iran, Saudi Arabia, France, UK, Turkey, Israel… and to put on the agenda different issues as democratic transition and regional integration. Question is: who’s initiative should it be? Who are these neutral powers likely to organise legitimately such a summit? UN? EU? India? China?

We, being Franck Biancheri’s heirs, would have been thrilled to see the EU organise the summit…

Bachar el-Assad crise Crise Syrienne Etat Islamique Etats-Unis europe russie Syrie 2016-10-17
Marie Hélène
Previous: US elections: the detonator of the ultimate phase of the economic and financial American crisis (Excerpt GEAB June 2016)
Next: US Isolation: When global finance turns away from the dollar system, it means the cliff is near