Home / Home / Accueil / What role – if any – for our generation in this new chapter of European history? 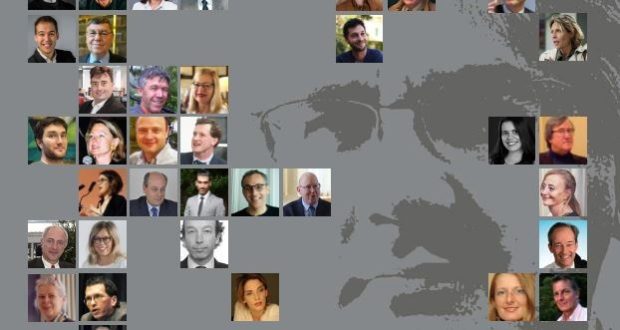 What role – if any – for our generation in this new chapter of European history?

On October 22, 2020, the Association of Friends of Franck Biancheri (AAFB) and the LEAP had the honor of solemnly handing over the Euro-Citizens Directory 2020 to the Fondation Jean Monnet pour l’Europe (FJME), not only bringing the living memory of his fellows into the archives of Franck Biancheri, but also bringing to a close the Vision Europe 2020 project, the cornerstone of LEAP2020’s work over the last twenty years, initiated by him in Athens in his famous speech in May 1998. In the second part of this ceremony, the Franck Biancheri networks organized an online debate: “What role – if any – for our generation in this new chapter of European history?” inviting the members of the directory to discuss the challenges that await us Europeans in this post-2020 and post-Covid world, and what contribution this generation “Europe”, the generation of the twenty-years-old in the 1980s, can and should make. Here are the conclusions of this 90-minute debate.

A Tribute to the genius of a European generation

With the perspective of time, it is possible to point out that the generation that reached adulthood in the 1980s is indeed a “Generation Europe”.

The political leaders of the time (such as Mitterrand, Kohl, Lubbers…) had experienced war. They knew exactly why Europe was needed. Out of their converging energies came a youth whose avant-garde helped them get Erasmus on track. But other young people were later to be added in this new Europe with student organisations and European university exchange programmes, falling borders, speeding trains, minitels and Internet communications that facilitated their connections. Thanks to all this they dreamt of citizens embodying and give flesh to the European institutions’ skeleton.

And we mobilised ourselves… as volunteers, with enthusiasm, passionate about discovering so many different languages, traditions, histories, cities…, working together, envisioning together our common future and how to build it. Oh yes, we did it with passion… and we also learned so much! We all remember this time as others before us remembered their war times… Some of us here are still striving to realize this common dream in one way or another. We have all carried this viaticum on our individual paths and making it grow.

Let’s be clear! The new generations, those under 35 today, are no longer European. Erasmus itself has become “mundus”, the dramatic challenges they have been called upon to take up collectively are global in nature: peace, democracy, the environment,… have to be tackled on a global scale now.

BUT (there is a BUT), while American citizens for example can influence these global agendas from a relevant level of action (their federal state), European citizens will only be able to act from a global and more powerful standing point if they manage to finalise the project of European construction and democratisation – otherwise they will only be able to act from much lower national levels.

And this is where we are still needed, fully aware of our strong generational, ideological and methodological characteristics.

Franck Biancheri is certainly a common reference point for us all. But this directory is above all a tribute to the European genius of an entire generation.

Time has passed and thanks to the Jean Monnet Foundation for Europe, our stories are beginning to enter the Great History. But it is also necessary to understand where we stand today, to project ourselves towards a new horizon and to see if and how our combined individual and collective experiences can help us to meet the great challenges facing our continental societies. This is what this debate has been about.

In just 90 minutes we have managed to get a very relevant overview of the challenges facing us Europeans:

In terms of democracy, progress has been made with transnational parties – such as those we had pre-configured (IDE and Newropeans) – which now exist as Volt and Diem25. An ECI has been launched for the recognition of trans-European parties . However, the European dimension remains a distant horizon for the vast majority of Europeans who have remained blocked at national level in terms of information, education and engagement since 1992. The European institutions seem unable to produce innovative ideas to better connect their citizens. For instance, while France, for example, activates its third assembly (the EESC) the European Parliament seems to have no problem being a “democratic” though « single chamber » assembly ; and the considerable help that new technologies could provide in connecting 500 million citizens to the European decision-making system has not yet been implemented.

At the very moment when the European level regains its relevance as the obvious superior provider of solutions, one wonders if it may not miss the historic opportunity it is being offered by the pandemic – due to a lack of human anchorage.

This democratisation remains the horizon of the new generations… except that they may not know where to start to get to reach the global dimension we have analysed. Our generation may have been right to believe that the democratisation of our global society required first that of our European society: the world is so big! But the following ones will probably find it more relevant to fight for the democratisation of the Internet… and they may be right. But what then about the European project? Is it still a project that deserves to be defended?

In any case, the democratic challenges of the next twenty years are much more urgent than they were in the 1990s. Our generation certainly has lessons to pass on to the next generations after 30 years spent reflecting on how to achieve this goal and observing a changing context both offering and calling for new solutions.

As far as education is concerned, we seem to agree that the new generations lack the added value of one generation: ours. It has been said loud and clear that networking, multilingualism, managing complexity… are skills that, unlike us who have had to strive for them, young people mistakenly think belong to them naturally. To be fit for transnational engagement, it is not enough to speak English and feel like a citizen of the world. Worse still, the elitism of an ultra-minority of young English-speaking ‘internationals’ is somehow fuelling and opposing large sections of nationalist/communitarian/populist movements. And it seems that both sides need to educate themselves: elites to grassroots realities and normal people to a higher level of global understanding and political engagement.

In the midst of the escalation of the multidirectional crisis of 2020, a wave of obscurantism is hitting Europe and the Western world that only a new Enlightenment era can fight: an era based on future-oriented and systemic/holistic education, and focused on the communitarisation of the major challenges of the future such as inventing new sustainable economic models, repositioning Europe in the world, putting new technologies at the service of societies and individuals, fostering a new social contract, …

Could Europe thus once again become an element of hope instead of the bureaucracy it has become over the last 30 years? (Franck said that the war generation saw Europe as a tool to solve the everyday problems on their desks, whereas the baby boom generation each day saw it as on problem on their desk to be solved).

The time perspective and the field experience of our generation can be a useful contribution to re-launch a movement in this direction. A better understood societal complexity that does not lead to conflicting simplifications is a challenge that our concrete experience of European diversity can help to address.

But beyond making ourselves merely available, we may have a role to play in triggering the movement itself. If our generation is not in the lead – and may never be, we have among us great influential personalities whose duty it is to obtain political/institutional/media/financial support from political/institutional/financial powers to launch not only a “Conference on the Future of Europe” but also a “Marshall Plan for Education for the Future of Europe” using all available channels to combine people, nationalities, skills and points of view, and to inaugurate a Common European Vision for 2040.

At a time when challenges are rapidly accumulating on our common table (terrorism, social division, new waves of immigration, economic crisis, neighbourhood conflict, popular anger linked to Covid…), when neither citizens nor decision-makers trust each other to understand and solve problems, let’s use the immense untapped know-how of our “Generation Europe” to act and rebuild a European society based on trust.

We invite you to view the video montage of this ceremony. It allows you to rediscover the strong and very moving moments of this ceremony, which brought together around 70 people, members of the directory, some of whom were meeting for the first time in a long time on the same stage. Interspersed with testimonies on the different stages of their activities, animated in sound and images by the artist Pascale Kaparis, the passage of the historical witness took place between Paris and Lausanne, but also Seville, Amsterdam, Frankfurt, Brussels, Lisbon, London… and beyond, Brazil, the United States, Russia… The Franck Biancheri networks inscribe European history in time and space. The preface to the directory, signed by Marie-Hélène Caillol, President of the AAFB and LEAP, invites you to understand the meaning and importance of this approach which pays tribute to a whole generation of European citizens, the Euro-citizens, the citizens of Europe. 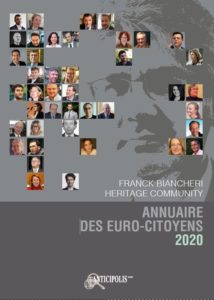 → Watch the video of rhe Handover ceremony on October 22nd, 2020