Exclusive// Deflation and real economy in the United States: the black hole (Article from GEAB february 2016)

The systemic crisis is spreading much faster in the real economy than in 2008-2009. This low dormancy is a sign that the economic protection dikes are severely lowered, the synergies are broken and the common strategies of global resilience have vanished. Within this statistical fog, not even fully lifted yet, our team needs once more to assess the health of the real economy, particularly in the United States.

The GEAB, LEAP’s confidential letter is a monthly bulletin available under subscription. Its contents are not made available to the public until three months later. We offer you the access to this exclusive article from February’s bulletin (GEAB n°102). If you want to read our articles in real time, subscribe to the GEAB!

The irretrievable loss of confidence in the US dollar which we have constantly documented month after month for ten years now, and the currency war, soon in full swing with a risk of cascading devaluations, finally show the aberration to measure the economy with this one standard, the dollar. But this standard is getting more and more dilated. Only intellectual crooks and other media jugglers could seriously measure the length with a graded elastic, or worse, with a spring.

How could a measurement of the economical activity really be done? 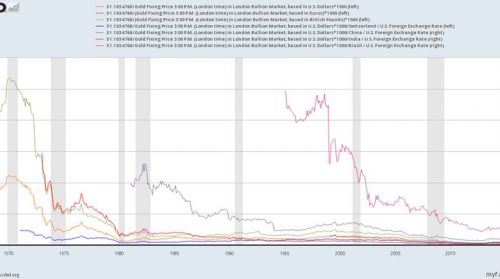 Here is the comparative evolution of the world’s major currencies, with their equivalents in grams of fine gold. That is to say, how can we get grams of gold by giving one unit of each currency in exchange? When we hear: “What is the price of gold in dollars?”, we should really understand:” What is the exchange value of the dollar? What is the price of dollars in gold? “

This evolution allows us to really determine whether a fiduciary currency gets stronger or not, not its exchange rate against the dollar.

If there were no speculation on the price of this fine metal, gold would definitely be a choice when it comes to picking up standards, but all kinds of manipulations of its exchange rate require us to consider the real economy in terms of practical exchanges.

Transportation of dry goods in bulk

The Baltic Dry Index (BDI) is tumbling again. It reached a new low point by going under the threshold of 300 points. The HARPEX index reached historical lows in all three categories of larger tonnage ships. The map below shows the precise location of each transporting ship around the US coast (the only exception being the Canadian port of Vancouver). While comparing it to the map of Europe, we simply realize to what extent the US is a desert to dry goods trade. 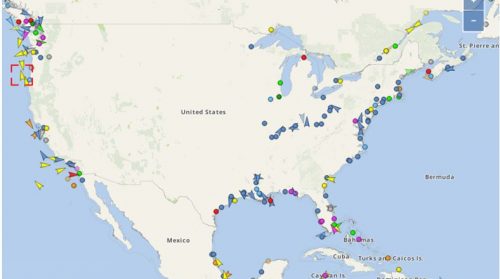 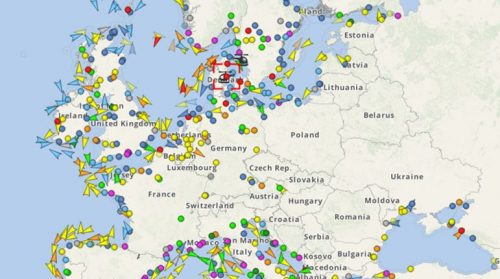 Let’s get closer at the suspect. The strategic retreat of the major regions into themselves is mechanically reducing international trade, while refocusing the residual activity within each region. But in the case of the United States, could it be that the pumpkin has quickly transformed into a vibrant domestic economy to the point that the strength of its GDP has no need of international trade? See below what weekly statistics say of coal transport by rail in the US. 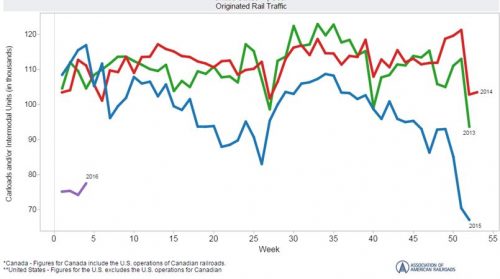 Coal transportation is the most significant part of the freight in the US (727 million tons in 2012). Its volume decreased by 30% in a few months. The transportation of oil products also decreased[1]. Yet, the United States, in October 2015 was still the world’s largest oil producer[2]. Seriously, do we need to convince ourselves to see so quickly the effect of a whole virtual economy, which has suddenly no need of conventional energy to increase GDP? Anyway, for the figures of the real economy the isolation campaign of the US against Russia is proving to be a new Berezina.

The High Yields at half mast

Since we are discussing energy, what happened with the bubble of the high yield bonds (high yield) we were talking about some bulletins ago? The answer is given by the BUYEN index which has reached a historic low level of 93.76 points, the lowest since the creation of the new index in January 2010 (basis 100). 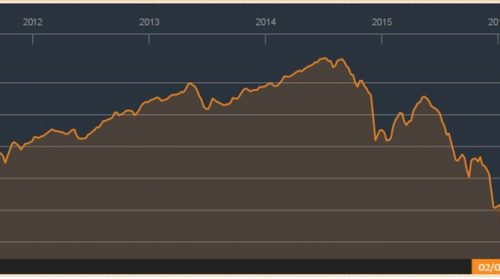 The burst of this bubble, initiated in 2010 by the US shale oil boom, is not confined to the areas of oil companies. The Global High Yield Corporate Bond Index (BHYC) is also experiencing a downward spiral, having lost 10.6% in 9 months.

This drop in corporate bonds means that it is increasingly difficult to find buyers whose investments allow them to refinance. With an oil price at $30/barrel, while the US shale oil cost price exceeds $60, the risk is far too great for investors. With no new financing plan, with big loans to repay (estimated at 3000 billion dollars globally in the energy sector), this rings the bell for a series of cascading bankruptcies by June…  unless …  unless the Fed blurs again the new cards the way it did in 2008, by buying in bulk many toxic loans and bonds from these companies and by injecting cash to recapitalize them. This is the inflexible logic of a centralized economy that is sinking into deflation: the lender desperately buys whole sectors of the economy at every jolt of the crisis. Just like a black hole distorts the space-time lines, absorbing the surrounding material, growing and becoming increasingly hungry, the same way the Western central banks distort the market economy in a single move: everything that gets inside the bank’s bosom never comes out again, except at the maturity (i.e. death). Knowing that the economy is also the fabric of legal protection and social ties, everything that makes life is doomed to disappear, to erode, to be mauled and captured by this insatiable black sun.

Deflationary mechanisms are at work everywhere in the West, exacerbated by rolling QE policy (ZIRP, NIRP) and not diminished by them[3]. The bond yields in 10 years in the Eurozone (European Financial Stability Facility) dip into the negative area with a record low reaching -0.3%, just like the 10-year rate of Switzerland (-0.258%, heading to the lowest of -0.38, the historical figure registered last December); the 5-year rate of Germany (-0.3%), and now the 5-year rate of Japan (-0.18% ). These negative rates are swallowing the invested capital.

On the front of the de-dollarization of the global economy which we anticipated, and were the first ones to do so, two iconic developments can be reported this month:

– Following the judgment of sanctions against Iran, this country and the European oil companies have agreed to settle the purchase of oil in Euros[4]; moreover, the trade between Iran, Russia and China will be in their national currencies[5] ;

– The sale of dollar assets (treasury bills …) by the central banks continues unabated: China sold 100 billion dollars of its reserve in January[6], and more than 200 billion in two months[7], which is shedding at a new speed record. This is to be compared with the fact that China continues to buy more and more gold bars[8].

As we can see, everything goes wrong in the United States. When the master is weakened, he is attacked from all sides. This is why the de-dollarization is relentlessly growing. Finance, which allowed the US to maintain its international yoke, is now weakened to the extreme, to the brink. All the changes that we have just described, which are partly consequences of these two phenomena (de-Americanization of the planet), will therefore extend – even worsen – in the short term. This leads us to anticipate, besides the next explosion in the US financial markets, the continued deterioration of the United States’ real economy.