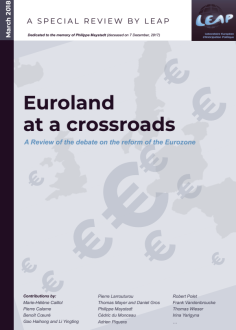 Special edition : Euroland at a crossroads

LEAP and Anticipolis have just released a Special Review entitled “Euroland at a crossroads” consisting of a compilation of complementary views on the theme of the reform of the eurozone, the purpose of which is to report on the vigor of the debate on this reform in order to encourage citizens to better grasp it, in line with the concern that has been ours for 30 years: European democratization.

It also includes one of the very last text written by Philippe Maystadt, who unfortunately passed away during the elaboration of the Review. We have wished to dedicate the entire work to his memory.

–> This Special Review is available in French and English, in electronic format, on Anticipolis for 5 euros.